You are here: Home1 / terrorism 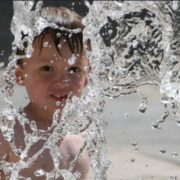 A record number of 3,700 delegates are meeting in the Swedish capital August 26-31 to explore solutions to the world’s escalating water challenges, hosted by the Stockholm International Water Institute (SIWI), which organizes World Water Week each year.

The urgency arises because wherever there is poor water management and stressed ecosystems, violent conflicts and poverty are sure to follow.

Decades of unprecedented economic and population growth, rapid urbanization and climate change have led to stressed ecosystems and high pressure on limited water resources. In response, societies must find and implement solutions that work with, not against, nature.

World Water Week has become the central meeting-place for the global water community to work out such dilemmas. This year the gathering is focused on the link between water, ecosystems and human development.

Amina Mohammed, deputy secretary-general of the United Nations and a former environment minister of Nigeria, speaks to an audience of water experts on August 27, 2018, the opening day of World Water Week 2018, Stockholm, Sweden. (Photo by Thomas Henriksson / SIWI) Creative Commons license via Flickr

Amina Mohammed, deputy secretary-general of the United Nations and a former environment minister of Nigeria, told conference delegates about the link between environmental degradation, poverty and violent conflicts in her home country, which has endured terrorism carried out by the Islamist militant group Boko Haram.

“I believe that the tragedy of Boko Haram is inextricably linked to poor water management, and the solution to the conflict in the region must include equitable ways of using water resources,” Mohammed said.

As an example of the dramatic consequences of a collapsing ecosystem, Mohammed pointed to Lake Chad, which has shrunk by 90 percent, saying, “It has impacted food insecurity and is increasing the risk of water-borne diseases, but it is also causing poverty by taking away farmers’ livelihoods, especially for women.”

“And it has a gender dimension, contributing, among other [thing]s, to low levels of school-enrollment among our girls. Taken together,” said Mohammed, “all these factors have contributed increasingly to insecurity in our region, already affected by religious extremism.”

Åsa Regnér, assistant secretary-general and deputy executive director at UN Women, described lack of water as a root cause of poverty and inequality since “…in Sub-Saharan Africa, women and girls spend 40 billion hours a year collecting water, equivalent to a year’s worth of labor by the entire workforce in France.”

“With the rapidly growing demand for water, it is becoming increasingly clear that water is everybody’s issue. Scarcity  of water has become the new normal in  so  many  parts of the world,” said SIWI Executive Director Torgny Holmgren.

In his welcome address this morning, Holmgren called for a shift towards more green infrastructure solutions, observing that they are inherently multi-functional.

“City parks retain rain, improve the microclimate, contribute to biodiversity – and look good doing so. Green solutions are, in addition, also often much more resilient than grey. They tend to bend rather than break under pressure,” said Holmgren. “They can repair themselves and restore their functionality also after significant damage.”

There is a growing realization everywhere that humans are increasingly vulnerable to water shortages, extreme weather and social unrest, Holmgren said.

Carin Jämtin, director-general of the Swedish International Development Cooperation Agency, also talked about the relationship between poverty, conflicts and lack of clean water.

“In countries affected by conflict and fragility, tensions over water increase,” Jämtin said. “There is evidence that water and sanitation infrastructure have been attacked, or that the access to clean water is denied as tactic or weapon of war.”

“Without access to clean water, children fall ill, hospitals do not function, and disease and malnutrition spread quickly. Among the threats against children in conflict, the lack of safe drinking water is one of the deadliest,” Jämtin said.

Stockholm Mayor Karin Wanngård, pointed to the risk from populism and short-sightedness but also felt that cities are increasingly coming together to find new solutions. “I hope that this week will help the global community to get closer to the goal of a sustainable world,” she said.

Some speakers expressed optimism about the increase in new solutions modeled on natural processes.

By revolutionizing microbiological-based technologies in water and wastewater treatment, the two professors have demonstrated how to remove contaminants from water, cut wastewater treatment costs, reduce energy consumption, and recover chemicals and nutrients for recycling.

Rittman told Maggie White, SIWI’s senior manager for international policies,  “We want to have a merging of environmental and economic interests. We don’t want to make pollution control and environmental protection just a cost to society, we want to turn that also into a generator of resources and economic value.”