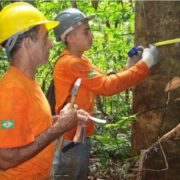 Formally known as Transparency for Sustainable Economies, Trase is led by the Stockholm Environment Institute and the Global Canopy Programme.

Trase draws on deep untapped sets of data tracking the flows of globally-traded commodities, such as palm oil, soy, beef and timber, responsible for tropical deforestation.

Trase responds to the urgent need for a breakthrough in assessing and monitoring sustainability triggered by the ambitious commitments made by government leaders to achieve deforestation-free supply chains by 2020.

In Morocco last November, a Trase-led side event at the 22nd Conference of the Parties to the UN Framework Convention on Climate Change (COP22), attracted experts in environmental policy, data analysis and commodity supply chains who strategized on upgrading supply-chain transparency to achieve trade that is free of deforestation.

The side event was hosted by the EU REDD Facility, which supports partner countries in improving land use governance as part of their effort to slow, halt and reverse deforestation.

REDD stands for “reducing emissions from deforestation and degradation,” a mechanism that has been under negotiation by the UNFCCC since 2005. The goal is to mitigate climate change by protecting forests, which absorb the greenhouse gas carbon dioxide from the atmosphere.

Participants discussed how to bring about step changes in the capacity of supply-chain actors to meet zero deforestation and sustainability commitments. They examined incentives for encouraging governments in consumer and producer countries to cooperate.

Tools such as the platforms launched by Trase to collect and analyze data and information can help purchasers to develop better sourcing strategies and governments to develop policies in the forestry sector and commodity trade.

The international trade in commodities such as soy, palm oil and beef is valued at billions of dollars. These commodities trade along complex supply chains that often have adverse social and environmental impacts, especially in developing countries.

Over the past 10 years, participants acknowledged, agricultural expansion has caused two-thirds of tropical deforestation, which in turn has accelerated climate change and threatened the rights and livelihoods of indigenous peoples and communities that depend on forests.

Participants agreed that consumers and markets around the world are demanding greater sustainability in producing and trading agricultural commodities.

Nowhere is this demand greater than in the European Union, which has set a goal of halting global forest cover loss by 2030 at the latest, and reducing gross tropical deforestation by at least 50 percent by 2020.

The EU and several EU Member States have endorsed the 2014 New York Declaration on Forests .

In 2015, several EU Member States signed the Amsterdam Declaration , which recognizes the need to eliminate deforestation related to trade in agricultural commodities and supports private and public sector initiatives to halt deforestation no later than 2020.

The EU is also conducting a feasibility study for a EU Action Plan on deforestation.

Some of the most interesting deforestation transparency work is being done in Brazil.

Pedro Moura Costa, founder and CEO, BVRio Environmental Exchange, says his organization and Trase are piloting a program to bring more transparency to Brazilian timber supply chains, to assess the causes of illegally harvested timber and to find solutions to minimize risks.

Through the partnership, BVRio will upload data to the platform on the legal status of forest operations in Brazil. This will enable Trase to track legally and illegally harvested timber from sources to buyers at the end of supply chains.

On the banks of the Tapajós River, in Brazil’s Pará state, is a community forestry project that works with sustainable timber extraction in the Amazon.

Since 2003, Cooperativa Mista da Flona Tapajós (Coomflona) has been operating in the region and today employs 150 managers, as workers in this sector are known. The yearly production is around 42,000 cubic meters of timber, which Costa says could be fully commercialized if not for the competition with illegal timber products.

The issue of legality in supply chains is rarely considered in transparency initiatives, but is vitally important, Costa points out.

Legality is at the core of the EU Forest Law Enforcement, Governance and Trade (FLEGT) Action Plan issued in 2003. The Action Plan sets forth a range of measures available to the EU and its member states to tackle illegal logging in the world’s forests by engaging with national governments on illegal logging.

BVRio Environmental Exchange in 2016 launched a Responsible Timber Exchange, a trading platform to assist traders and buyers of timber in sourcing legal or certified products from all over the world.

The platform is integrated with BVRio’s Due Diligence and Risk Assessment tools, designed to assist traders and buyers of tropical timber in verifying the legality status of the products purchased and their supply chains. The system is based on big data analysis and conducts more than two billion crosschecks of data daily.

Since their release in 2015, the tools have been used by traders and environmental agencies worldwide to screen thousands of timber shipments.

Costa says, “Compliance with local legislation is an essential requirement of any initiative to promote good land-use governance and, ultimately, to achieve zero deforestation supply chains.“

Companies too are engaged.

“Trase can help us move away from the blame game, to start a practical discussion around issues and solutions,” says Lucas Urbano, project management officer for climate strategy with the Danone, based in Paris, one of the world’s largest dairy and packaged food companies.

Danone has committed to eliminating deforestation from its supply chains by 2020. The company is a signatory of the New York Declaration on Forests as well as a member of the Consumer Goods Forum.

For a company like Danone, transparency and better information about the impacts and conditions in jurisdictions where its supplies originate from are hugely important, Urbano recognizes.

Transparency is the first major step in eliminating deforestation from Danone’s value chains, because supply-chain complexity and opacity are barriers to action, he says.

“Transparency initiatives such as Trase help Danone to understand who to convene and engage with in strategic supply chains. At the same time,” Urbano says, “transparency will make it impossible for companies to hide behind the complexity and opacity of supply chains.“

Trase is made possible through the financial support of the European Union, the Nature Conservancy, the Gordon and Betty Moore Foundation, the Swedish Research Council FORMAS and the UK Department for International Development.

Maximpact’s consultant network has a wide range of  sustainable forestry and environmental experts that can assist your organization. Create forestry projects through Maximpact’s Advisory and discover project services for all types of business and organizations. Contact us at info(@)maximpact.com and tell us what you need.