You are here: Home / soft robotics 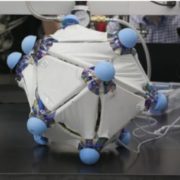 NEW HAVEN, Connecticut, September 20, 2018 (Maximpact.com News) – Search-and-rescue robots that act without risk to first responders, a robotic gripper that grasps and moves objects – these applications and many more just moved closer to reality with the development of a new technology in a Yale University lab.

The Robotic Skins were created in the lab of Rebecca Kramer-Bottiglio, assistant professor of mechanical engineering and materials science at Yale.

The skins are made from elastic sheets embedded with sensors and actuators. Placed on a soft object such as a stuffed animal or a foam tube, the skins animate it from the surface.

The robots can do different tasks depending on the properties of the soft objects and how the skins are applied.

“We can then take those same skins off that object and put them on a shirt to make an active wearable device,” she said.

With the robotic skins on board, said the Yale scientist, anything from a balloon to a ball of crumpled paper could potentially be made into a robot with a purpose.

In the past, robots have been built to serve a single purpose.

Now the robotic skins allow users to create multi-functional robots on the fly. Kramer-Bottiglio says that means they can be used in settings that hadn’t even been considered when they were designed.

Piling on the skins in layers allows for more complex movements and different types of motion.

“Now we can get combined modes of actuation – for example, simultaneous compression and bending,” Kramer-Bottiglio said.

To demonstrate the robotic skins in action, the researchers created prototypes – foam cylinders that move like an inchworm, a shirt-like wearable device designed to correct poor posture, and a device with a gripper that can grasp and move objects.

Kramer-Bottiglio said she came up with the idea for the devices a few years ago when the U.S. National Aeronautics and Space Administration (NASA) issued a call for soft robotic systems.

The technology was designed in partnership with NASA.

The multifunctional and reusable nature could allow astronauts to accomplish an array of tasks with the same reconfigurable material.

The same skins used to make a robotic arm out of a piece of foam could be removed and reapplied to create a soft Mars rover that could roll over rough terrain.

“One of the main things I considered was the importance of multifunctionality, especially for deep space exploration where the environment is unpredictable,” said Kramer-Bottiglio. “The question is: How do you prepare for the unknown unknowns?”

The team’s work was published Wednesday in the journal “Science Robotics.”

Next, said Kramer-Bottiglio, her lab will work on streamlining the devices and will explore the possibility of 3D printing the components.

In other soft robotics research, Kramer-Bottiglio is planning “to realize deployable self-constructing robots (bagbots) based on robotic skins that ingest and manipulate material.”

“Bagbots are optimal for exploration of unknown environments, which directly contributes to NASA’s strategic goal to expand human knowledge through scientific discoveries,” she writes.

A bagbot can be transported as a lightweight system, but later can self-construct a body made from clay or other surface materials.

For her work with soft robotics, Kramer-Bottiglio was in May part of a group of researchers awarded a $2 million grant from the National Science Foundation, as part of its Emerging Frontiers in Research and Innovation program.

Titled “Soft Robotics to Broaden the STEM Pipeline,” this project aims to increase female interest in science, technology, engineering and mathematics (STEM) careers through the emerging field of soft robotics.

“Soft robotics are different from other robotics in that they leverage materials science (understanding how materials stretch and deform), chemistry (polymer synthesis), and biology (bio-inspired design) to provide aids for human needs,” write the four co-authors in their summary of the project.

The focus is an eight-hour unit within a high school freshman engineering course that is taught in over 270 school districts across 23 states to about 100,000 students annually.

For this project, Kramer-Bottiglio is joined by Nathan Mentzer, associate professor Engineering/Technology Education at Purdue University, and two others. Together they will develop and test curriculum that has the potential to broaden female participation in robotics in 11 classrooms, a total of 660 students in Maryland’s Carroll County Public Schools.

Once it is complete, the International Technology and Engineering Educators Association STEM Center for Teaching and Learning will distribute the curriculum to 50,000 students every year. 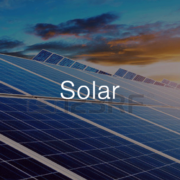 After a nationwide bidding process, Defense Secretary Ashton Carter Friday announced the award of the Manufacturing Innovation Institute for Flexible Hybrid Electronics to a public-private consortium based in San Jose.

The seventh new manufacturing institute created by the Obama Administration since 2012 is a consortium of 96 companies, 41 universities, 14 state and local government organizations, and 11 labs and non-profits.

“This is one of my core goals as Secretary of Defense,” said Carter, announcing the award at Moffett Airfield, “renewing the ties, the bonds of trust between our national security endeavor at the Pentagon, and our wonderful, innovative, open technology community of companies and universities that make up one of America’s great strengths.”

The new institute will receive $75 million in Department of Defense funding over five years, matched with more than $90 million from industry, academia, and local governments, for a total of $171 million to advance flexible hybrid electronics manufacturing.

It will be managed by the U.S. Air Force Research Laboratory and led by the FlexTech Alliance, a research consortium and trade association.

Jennifer Ernst, who chairs the FlexTech Alliance Governing Board and serves as chief strategy officer of Thin Film Electronics, said, “Flexible electronics are already re-shaping multiple markets, with a growing demand from customers. This initiative is a catalyst that ensures the U.S. will benefit from the industry’s commercial growth, with deep supply chains, multiple product developers and integrators participating.”

By packaging electronic components on flexible stretchable substrate, these devices can be attached to curved, irregular surfaces and stretched across buildings, objects, and humans.

Carter envisions seamless printing of lightweight, flexible structural integrity sensors right onto the surfaces of ships and aircraft, or folded into cracks and crevices where rigid circuit boards and bulky wiring could never fit.

“We’ll be able to have real-time damage reports,” he said. “Our troops will be able to lighten their loads with sensors and electronic gear embedded in their clothing, and wounded warriors will benefit from smart prosthetics that have the full flexibility of human skin.”

Embedded sensors will be able to monitor the state of commercial automobiles and aircraft operating in harsh conditions such as undersea pressure or extreme temperature.

U.S. Congressman Mike Honda, a Democrat who represents San Jose and Silicon Valley, worked with Congress to bring the institute to Silicon Valley.

At the award announcement, Honda said, “Headquartering this Flexible Hybrid Electronics hub in San Jose ensures that the best of Silicon Valley’s tremendous academic, commercial, industrial, public, and labor resources are available to bridge the technology transfer gap and develop this emerging, game-changing technology as it reshapes the electronics industry and brings good-paying, middle-class manufacturing jobs to the Bay Area.”

After a decade of decline in the 2000s, when 40 percent of all large U.S. factories closed their doors, American manufacturing is adding jobs at its fastest rate in decades, with nearly 900,000 new manufacturing jobs created since February 2010.