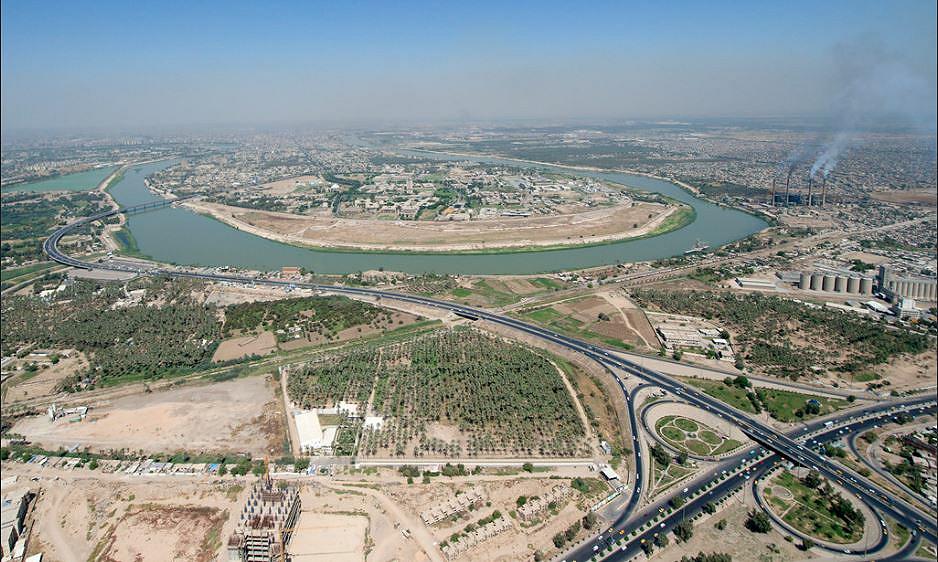 An aerial view of the Tigris River as it flows through Baghdad, Iraq, population 8.76 million, the second largest city in the Arab world, July 31, 2016. (U.S. Dept. of Defense Photo by Navy Petty Officer 2nd Class Dominique A. Pineiro) Public domain

“The water crisis is sneaking up on humanity unawares. People turn on the tap and assume clean, safe water will always flow. But the reality is that supplies are already critical for 4.2 billion people – over half the world’s population,” says Cribb. “During times of drought, megacities like Sao Paulo, La Paz, Los Angeles, Santiago, 32 Indian cities and 400 Chinese cities are now at risk.“

“World water use is already more than 10 trillion tonnes a year. While the human population has tripled since 1950, our water use has grown six-fold,” says Cribb.

In his book, Cribb cites some disturbing facts:

Pope Francis has warned that humanity could be moving toward a “world war over water.”

Addressing an international seminar on the human right to water hosted in February by the Vatican’s Pontifical Academy of Sciences, the Pope said, “It is painful to see when in the legislation of a country or a group of countries, water is not considered a human right. It is even more painful when it is removed from legislation and this human right is denied. I ask myself if in the midst of this third World War happening in pieces, are we on the way to a larger world war over water?”

Each of the last three UN secretaries-general – Ban Ki-Moon, Kofi Annan and Boutros Boutros-Ghali – has warned of the dangers of world water scarcity and of future water wars.

To counter this danger, José Graziano da Silva, who heads the Rome-based UN’s Food and Agriculture Organization, is focusing on the cradle of civilization, the area between the Tigris and Euphrates Rivers, and the entire Gulf region, as one of the areas most exposed to the risks posed by climate change, particularly water scarcity.

In an opinion article written in January, Graziano da Silva cited research by the Intergovernmental Panel on Climate Change as the authority for his warning, “The Gulf region is poised to experience a significant uptick in the frequency of consecutive dry days…“

“If we fail to keep average global temperatures from rising more than two degrees Celsius, the region often known as the cradle of human civilization will increasingly face extreme heat waves of the kind that disable the human body’s ability to cool itself,” the FAO leader wrote.

He says avoiding that fate is within our means, but requires that governments muster the will to “increase food output by around 50 percent by 2050,” and we have to do that, he says, “without depleting strained natural resources beyond the tipping point.“

In the Gulf region particularly, says Graziano da Silva, no government can accomplish this alone. The region imports about half of all its wheat, barley and maize, and 60 percent of the region’s fresh water flows across national boundaries.

Graziano da Silva draws his hope for the future from the Near East and North Africa’s Water Scarcity Initiative , a partnership for water reform in the Gulf region.

This network of partners, which includes over 30 regional and international organizations, is working to provide member countries with opportunities to learn and share practices in the sustainable use and management of water.

Water scarcity in the Near East and North Africa region is already severe.

Fresh water resources are among the lowest in the world. They have fallen by two-thirds during last 40 years and are expected to drop at least more 50 percent by 2050.

Ninety percent of the region’s land lies within arid, semi-arid and dry sub-humid areas, while 45 percent of the total agricultural area is exposed to salinity, soil nutrient depletion and wind water erosion, according to the FAO.

At the same time, agriculture in the region uses roughly 85 percent of the available freshwater.

The Initiative is attempting to bring scientific tools to bear on these grim facts. Water accounting, food-supply cost curve, gap-analysis and regular monitoring of agricultural water productivity are some of the advanced tools that the Initiative will use to quantify the benefits and costs of alternative policy options to address food insecurity while sustaining water resources.

Data collection, management and analysis are the backbone of the Initiative that will support the strategic planning for water resources and provide evidence for policy formulation.

Making use of the expertise developed by FAO and its partners, the Initiative will advise governments and the private sector on the adoption of modern technologies and institutional solutions to increase the efficiency and productivity of water use in agriculture for the benefit of millions of farmers and rural communities in the region.

Options to save water all along the food value chain will be shared with the private sector, while governments will be encouraged to promote incentive frameworks that reposition farmers at the center of the sustainable management of land and water resources.

The Initiative will support the ongoing major policy processes in the region, including the Arab Water Security Strategy 2010-2030 and the Regional Initiative for the Assessment of Climate Change Impacts on Water Resources and Socio-Economic Vulnerability in the Arab Region.

FAO’s work in the region ranges from emergency efforts in response to the conflicts in Syria and Yemen to running Farmer Field Schools in Egypt and helping the United Arab Emirates develop their first national agricultural policy.

The UAE is planning to roll out water meters on farms, while at the same time introducing smart subsidies targeting those who consume less water than average.

Benefits range from better diagnostic data on actual water use and incentives to actual conservation practices to allocating the savings to farmers who can invest in their businesses for even more efficiency.

“That climate change poses such threats to an area known as the cradle of civilization underscores the need for urgent action to put agriculture at the center of the sustainability agenda,” says Graziano da Silva.

World Water Day, on March 22 every year, is about taking action to tackle the water crisis. Today, there are over 663 million people living without a safe water supply close to home, spending countless hours queuing or trekking to distant sources, and coping with the health impacts of using contaminated water.

This year’s theme: Why waste water? is in support of Sustainable Development Goal 6 – to ensure the availability and sustainable management of water and sanitation for all by 2030.

And now it’s not just a day, or just a week, like the prestigious annual World Water Week in Stockholm in September, but the United Nations has designated another decade to mobilize for water conservation and sustainable use.

The UN Water for Life Decade 2005-2015  a knowledge hub, a best practices program, encouraged communications regarding water and integrated into its work the accomplishments of the UN-Water technical advisory unit.

In December 2016, the UN General Assembly unanimously adopted the resolution “International Decade (2018–2028) for Action – Water for Sustainable Development” to help put a greater focus on water during 10 years.

Emphasizing that water is critical for sustainable development and the eradication of poverty and hunger, UN Member States expressed deep concern over the lack of access to safe drinking water, sanitation and hygiene as well as concern over water-related disasters, scarcity and pollution worsened by urbanization, population growth, desertification, drought and climate change.

The new Decade will focus on the sustainable development and integrated management of water resources for the achievement of social, economic and environmental objectives.

To set the agenda in motion, UN-Water, in its 26th meeting in Geneva in February, decided on the establishment of a Task Force to facilitate its support to the planning and organization of the International Decade for Action – Water for Sustainable Development.

Featured Image: Mullah Neoka and his sons are wheat farmers in Afghanistan’s Herat province, once the bread basket of central Asia before land mines made farming impossible. HALO Trust, a UK-supported project to clear land mines has restored the land for agriculture. 2011. (Photo by Catherine Belfield-Haines / UK Department for International Development) Creative Commons license via Flickr

Maximpact’s consultant network has a wide range of water experts that can help your organization with water related environmental protection and water projects. Contact us at info(@)maximpact.com and tell us what you need. World’s Most Ethical Companies of 2017