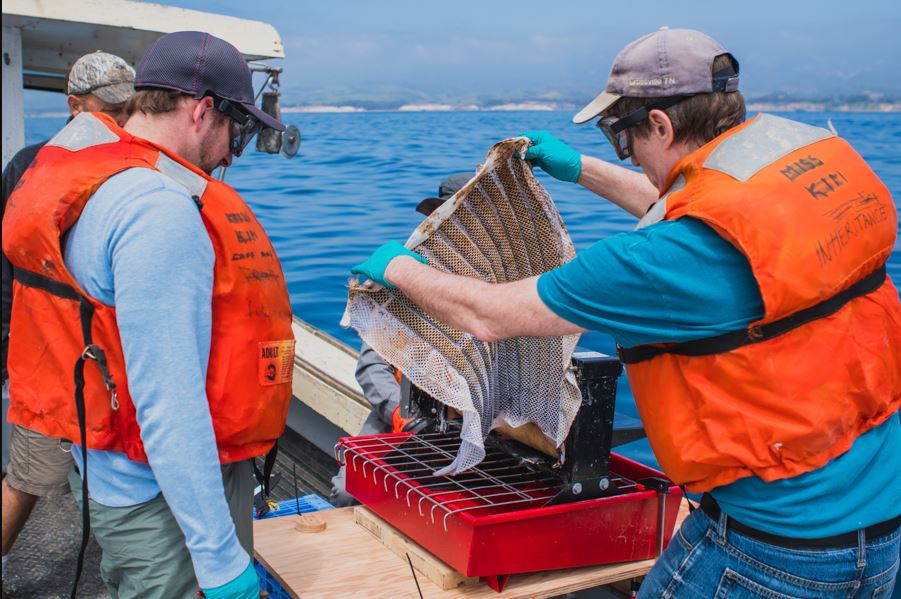 WASHINGTON, D.C., July 17, 2018 (Maximpact.com News) – “We have a water crisis, which is based on increasing population, urbanization and climate disruption. And there’s unsustainable use of our water,” said Argonne National Laboratory researcher Seth Darling. “Part of addressing this is through policy solutions, but we also need new, more energy-efficient and cost-effective technologies.”

As shown this year by South Africa’s countdown to “Day Zero,” or the day the water taps are expected to run dry, water scarcity continues to be a growing problem across the globe. The current system is almost entirely dependent on rainfall.

Darling’s new and comprehensive research paper describes some of the most advanced innovations that could improve access to clean water globally. It was released this week in the “Journal of Applied Physics,” published by the American Institute of Physics.

Darling’s focus is on understanding and controlling the interfaces between materials and water. Interfaces are what determine the performance of technologies such as water quality sensors, filtration membranes and pipes.

Adsorbents of All Kinds

Adsorption is one of the best mechanisms for cleaning water. A sorbent is a material used to absorb or adsorb liquids or gases. In the adsorption process, contaminants adhere to the surface of porous materials to maximize surface-to-volume ratio. Darling’s own labs are working on adsorbents to advance water treatment.

Highly porous activated carbon is the most extensively used adsorbent because it is abundant and inexpensive.

Zeolites, a kind of rock that can trap water within, can trap whole molecules in their 3D crystalline cage structures, enabling them to selectively bind particular compounds from water-based solutions.

There are about 40 naturally occurring zeolites, formed in both volcanic and sedimentary rocks, says the U.S. Geological Survey. Around 150 more artificial, synthetic zeolites have been designed for specific purposes, such as laundry detergent.

Polymer-based sorbents have nearly limitless flexibility in their design. To meet the demand for green chemistry and sustainable development, much research has been devoted to the design and synthesis of advanced adsorbent nanomaterials such as polymer-based sorbents for efficient adsorption, separation and purification.

“We will continue to rely on these proven technologies,” Darling said. “But there is also a pressing need for sorbents that are more effective and energy-efficient.”

In recent years, functional hydrogels have emerged as effective adsorbents for the removal of water-soluble contaminants. A hydrogel is a gel composed of polymers suspended in water. For instance, a silicone hydrogel is used to make soft contact lenses.

But for amorphous soft materials such as hydrogels, a relatively long time is required to reach a saturated state of adsorption, writes Wantai Yang and colleagues from China’s Beijing University of Chemical Technology in a paper on hydrogels from 2016. “Meanwhile,” writes Yang, “difficulties associated with the regeneration and disposal of hydrogel adsorbents constitute major obstacles for their practical application.”

Engineered porous membranes can help recover freshwater from heavily polluted groundwater and seawater, which is a critical need in developing countries and arid environments like the Arabian Peninsula.

Now, Zhiping Lai and colleagues from King Abdullah University of Science and Technology (KAUST) in Saudi Arabia have developed carbon-composite membranes that consist of a network of carbon fibers deposited on a porous, hollow ceramic tube.

Lai calls these membranes, “the first that can be used in all three membrane-based desalination processes, namely membrane distillation, reverse osmosis and forward osmosis.”

These membranes can simultaneously reject all the salt plus let large quantities of freshwater through their nanoscopic pores while consuming little energy. The water fluxes are up to 20 times higher than for commercial membranes.

These results come from a unique interfacial salt-sieving effect, which differs from a solution-diffusion mechanism observed in polymer membranes, explains Lai.

One side of the membrane is immersed in salt water while the other is in contact with freshwater, creating a gap between two liquid surfaces.

“Water evaporates from the salt water and quickly passes through the carbon gap before condensing at the freshwater side. Thanks to the excellent thermal conductivity of carbon fibers, most of the energy can be recovered, which reduces energy consumption by more than 80 percent,” explains Lai. 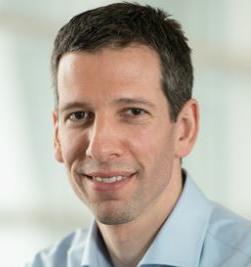 Reuse or Be Left Behind

Reusability is a critical characteristic for sorbent materials; it can reduce costs and increase the sustainability of a treatment process. Polymeric foam sponges are promising candidates for this approach.

Darling, who serves as director of the Institute for Molecular Engineering at Argonne National Lab, is heading a group that created the Oleo Sponge, which can soak up 90 times its weight in oil throughout the entire water column.

The metal oxide serves as the glue to which the oil-loving molecules attach.

Oleo Sponge is reusable; you simply wring the reclaimed oil into a holding tank. This cuts waste resulting from the clean-up process and enables a small amount of adsorbent to mitigate enormous spills.

The technology is the first and only option to adsorb oil and other petroleum products below the water surface. Current industry-standard technologies only address the surface.

Oleo Sponge is environmentally friendly, doing no harm to sea life, animals or the larger environment, a key advantage when compared with chemical dispersants or burning techniques that are used today.

“This technology is so important because, despite the industry’s best intentions, oil spills continue to happen, and existing cleanup methods are surprisingly inadequate,” said Darling.

“This technology has so many applications,” Darling said. “We are excited about the opportunities for other environmental remediation applications and beyond, which makes us that much more motivated to keep working on it.” 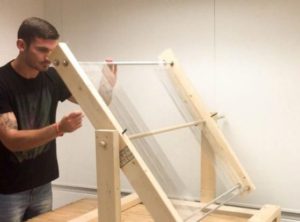 Josh Tulkoff constructs a large prototype of the fog harp – a vertical array of 700 wires. Tulkoff was part of an interdisciplinary research team at Virginia Tech that discovered parallel wire arrays could increase the water collection capacity of fog nets threefold. 2018 (Photo courtesy Virginia Tech) Posted for media use.

Installing giant nets along hillsides and mountaintops to catch water out of thin air sounds more like folly than science. However, the technique has become an important avenue to clean water for many who live in arid and semi-arid climates.

A passive, durable, and effective method of water collection, fog harvesting consists of catching the microscopic droplets of water suspended in the wind that make up fog.

Fog nets have been in use since the 1980s and can yield clean water in any area that experiences frequent, moving fog. Fog harvesting has gained acceptance in areas of Africa, South America, Asia, the Middle East, and California.

As wind moves the fog’s microscopic water droplets through the nets, some get caught on the net’s suspended wires. These droplets gather and merge until they have enough weight to travel down the nets and settle into collection troughs below. In some of the largest fog harvesting projects, these nets collect an average of 6,000 liters of water each day.

Now an interdisciplinary research team at Virginia Tech has improved the traditional design of fog nets to triple their collection capacity.

Published in “ACS Applied Materials & Interfaces,” the team’s research demonstrates how a vertical array of parallel wires can change the forecast for fog harvesters. In a design the researchers have called the “fog harp,” these vertical wires shed tiny water droplets faster and more efficiently than the traditional mesh netting used in fog nets.

“From a design point of view, I’ve always found it somewhat magical that you can essentially use something that looks like screen door mesh to translate fog into drinking water,” said Brook Kennedy, associate professor of industrial design in the Virginia Tech College of Architecture and Urban Studies and one of the study’s co-authors. “But these parallel wire arrays are really the fog harp’s special ingredient.”

Kennedy, who specializes in biomimetic design, found his inspiration for the fog harp in nature.

“On average, coastal redwoods rely on fog drip for about one-third of their water intake,” he said. “These sequoia trees that live along the California coast have evolved over long periods of time to take advantage of that foggy climate. Their needles, like those of a traditional pine tree, are organized in a type of linear array. You don’t see cross meshes.”

With a desire to develop breakthrough technologies for water filtration and purification, French researchers have developed membranes with artificial channels inspired by the proteins that form the pores in biological membranes – aquaporins.

The scientists from the French National Center for Scientific Research, the largest governmental research organization in France, use an innovative spectroscopic technique.

With their new technique, they have been able to observe that, in the very restricted space in these channels, water molecules organize in a regular manner, in an oriented molecular wire structure – the water has become “chiral.” A chiral phenomenon is one that is not identical to its mirror image.

Water, via hydrogen bonds, interacts with the walls of these artificial channels. In the resulting superstructures, the molecules forming the channels transmit their chiral character to the water threads, and give the water molecules a preferred direction. Building in Many Shades of Green
0 replies