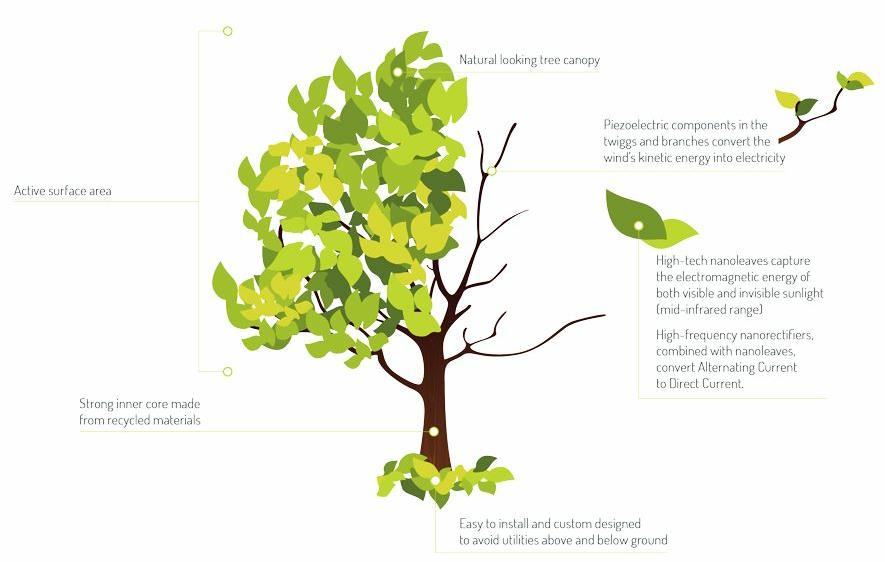 Diagram of how an energy tree will function. (Graphic courtesy Solar Botanic)

LONDON, UK, August 8, 20127 (Maximpact.com News) – Clean tech meets art meets life in a new energy tree with nanoleaves that absorb sunlight and quiver in the breeze to produce solar and wind power. A natural-looking, energy generator that looks like a real tree, the emerging new technology could completely change how homes are powered.

The energy tree stands 16 foot (4.87 meter) tall and can generate nearly three times the electricity an average family uses in a year.

A typical three bedroom house in the UK uses 3,300 kilowatt hrs of energy a year, according to The Carbon Trust and National Energy Agency. The energy tree can generate at least 12,000 kilowatt hours a year, its creators say.

They estimate that each tree would cost about £15,000, with the leaves themselves at less than £3 each.

Design and engineering students at Brunel University London have developed the tree concept and tested the e-leaves prototype for the London-based renewable energy start-up, Solar Botanic.

“We wanted the leaves to look like leaves, so we used a green plasma coated solar cell,” said Dr. Zahir Dehouche, a sustainable energy specialist at Brunel University London.

“The idea is for people to see a leaf. It’s very attractive, an art installation almost that combines design and an energy system,” Dr. Dehouche said.

Inspired by photosynthesis, the energy tree copies the Earth’s natural aesthetics to create a beautiful complement to modern surroundings. The technology is based on biomimicry, an approach that seeks sustainable solutions that emulate natural functions.

The energy tree’s nanoleaves are made of a thin sunlight-activated photovoltaic film, covered in a protective green layer flexible enough to shimmer in the breeze.

The branches, twigs and leafstalks carry high-resistance piezoelectric ribbons that harvest kinetic energy as they move, so sunlight, raindrops and wind all create energy as they come in contact with the tree.

Once produced, the electricity travels down a trunk made of high-strength recycled polymers and synthetic resin.

It works as a giant solar panel and wind turbine, so the stronger the sun and the windier the day, the more power it produces.

The combination of nanoleaves and piezoelectric ribbons ensures a harvest of electricity throughout the seasons – rain or shine.

The idea has been gestating for 15 years in the mind of Solar Botanic owner Alex van der Beek. While on a train ride to visit his sister in the Netherlands in 2002, where wind turbines mark scenic views, van der Beek thought that electricity could be generated by something more beautiful, a fake tree, he told “Scientific American” in 2009.

When thousands of these units, which he calls nanoleaves, are placed on a natural-looking plastic tree, electricity can be produced without spoiling natural landscapes, van der Beek says.

Solar Botanic aims to start building its first full-scale tree at the end of this year.

Plans call for electricity generated by the energy trees to go directly into homes through underground cables. Excess power can be stored in batteries and sold to the national grid.

The tree’s recyclable trunk can be fitted with street lights, or packed with generators to charge electric cars, mobile phones or robots.

Van der Beek envisions forests of energy trees. With the proper installation, a group of trees could power a neighborhood.

In developing countries, which often have brighter sunlight than shines on London, the trees would be extra efficient, helping to supply power as demand spikes.

“The tree is a sculpture that invites people to connect with renewable energy,” said Elise Hounslow, a Brunel University design and industrial technology graduate.

“It shows green energy doesn’t have to be ugly or intrusive,” she said, “it can be beautiful and make us feel positive about changing our ways for a brighter future.” Nonprofit Lawyers: It's not an Oxymoron, It's ELAW Phone Route to Wealth for the Unbanked
Scroll to top