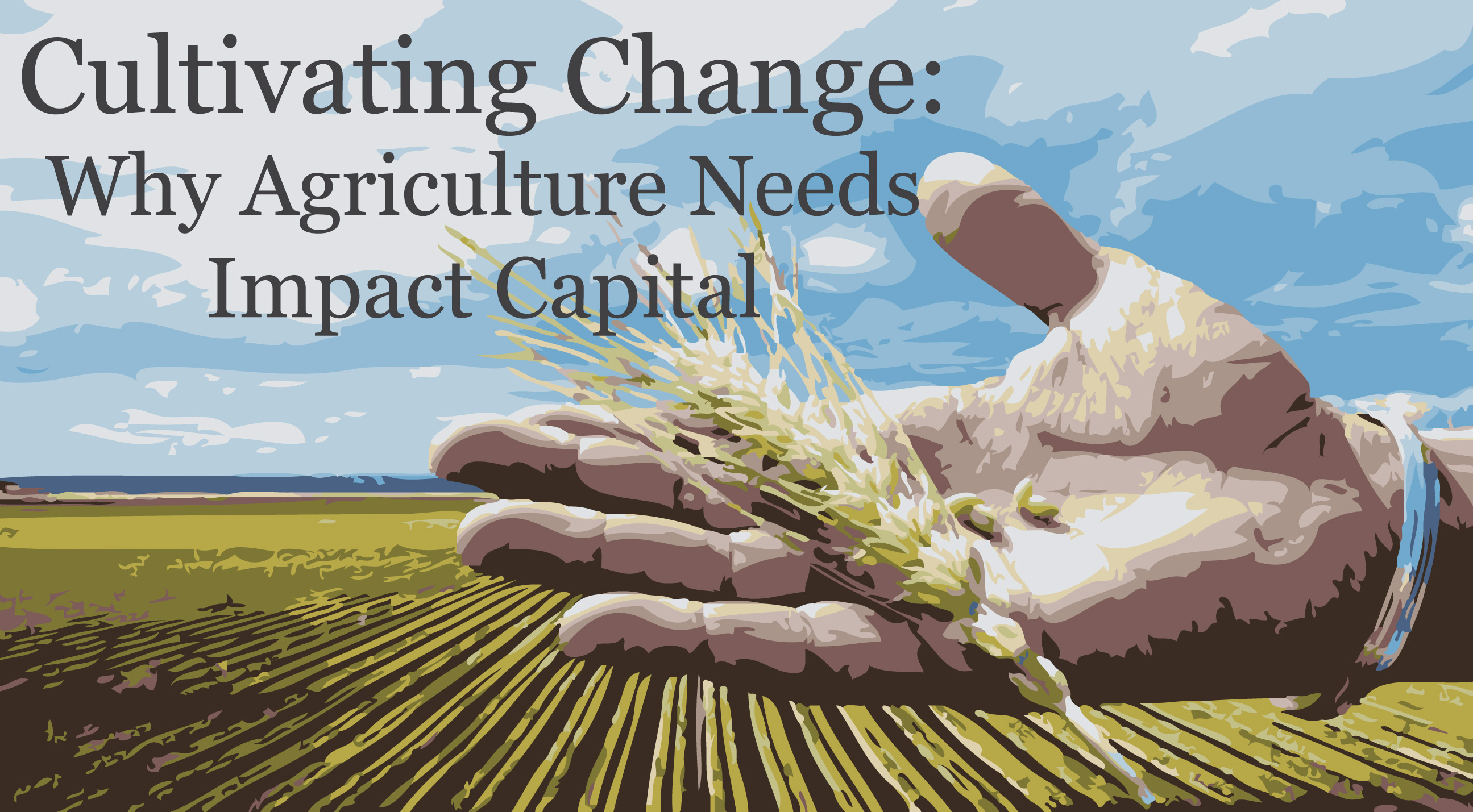 There’s a global food crisis looming, according to many commentators. The food price crisis of 2008 spooked world markets and gave us a taste of what may be to come in the future: commodity prices went through the roof and people in many parts of the world panicked. This lead to a reappraisal of food and agricultural policy in many quarters,spurring international aid organizations to action and attracting private investment to agriculture. This changed the agricultural investment landscape; but not enough. There remains an urgent need for impact capital in agriculture today.

The lay of the land

One thing is certain: agriculture is a sector set for growth it has to be. Global populations are rising and adopting new dietary patterns as income levels increase in developing countries. Researchers predict that by 2050 the demand for crop foods will increase by 100% by 2050 and for animal foods by110%. Yet food stocks in many countries are dropping to some of the lowest levels yet seen and food production is not increasing fast enough to meet future demand.

Other related factors are driving change. Rising oil prices continue to exert an upward pressure on food prices while at the same time the diversion of cropland for use in growing biofuels is limiting the amount of land used for producing food. Political and economic in stability in some regions, changing weather patterns and plant diseases, such as the coffee rust now affecting Central America, are contributing to a sense of scarcity that is driving food prices higher; and fuelling markets in agricultural futures, agribusiness and land.

Large investors buy in to agriculture

As a result, agriculture is very much on the map for large multinational corporations and traditional investors. One indicator is that agricultural ETFs (electronically traded funds) such as MOO, PAGG and CROP have been hot property in recent months. These funds are typically populated by agricultural giants such as Monsanto, Syngenta, Cargill and Deere. Multinational corporations such as these have been actively expanding their agribusiness holdings and penetrating new markets, especially in developing countries, in preparation for a future where food is in more demand than ever before.

The actions of governments, arguably the biggest buyers of food, are still extremely important in this sector. Food supplies are a political issue across the world and many governments maintain stores of staples as a matter of policy; a factor not set to change in the foreseeable future. Beyond this, many developing countries are also investing more in agriculture in a move to increase production: China for example upped its agricultural budget 27% in 2007, 38% in 2008, and about 20% in 2009. At least some of this money is going into increasing production outside of China in countries such as Africa, further turning up the heat under agriculture as an investment.

This heated market activity is not necessarily good news for a hungry world. In 2007-2008 high market volatility driven by the export policies of some governments and commodity speculation resulted in a global food price crisis. Prices for staples such as corn and rice shot up by as much as 217%, sparking food riots in several countries. The complex reasons for the crisis are explored in this podcast from NPR’s Planet Money. One of its effects was to galvanize the international aid community to action.

After “decades of disinvestment in agriculture” (to use the words of Root Capital’s Mike McCreless) agencies such as the Food and Agriculture Organization of the United Nations (FAO) and the World Bank and others hurried to establish a slew of new aid programs to support agricultural development including the Global Agriculture and Food Security Fund, the US government’s Global Hunger and Food Security Initiative, Feed the Future, and US AID’s Investing in Sustainable Agriculture program. According to Official Development Statistics, aid for agriculture rose 19% between 2005-2010, and this trend toward more investment is continuing.

Yet the need for impact investment remains

Given this increased global interest in agriculture by governments, international agencies and multinational corporations, is there still a role and, importantly, are there still opportunities for impact investors?

A majority of impact investing thought leaders think the answer to both questions is yes. The establishment of GIIN’s Terragua working group, whose membership includes the IFC, OPIC, WK Kellogg Foundation, Omidyar Network, the Tony Emelelu Foundation, Calvert, Accion, IGNIA and many more serious impact players, is one indication of the continued importance of sustainable private investment in agriculture. Terragua’s focus is agriculture in Africa, but the principles behind the need for impact investing are similar in other parts of the world.

Toward a healthier marketplace

When it comes to creating global food security there are indications that the markets, at least as they stand, may not be our best tools. Government food policy and commodity speculation were widely blamed for the food price crisis of 2008; and these have not gone away. With all the drivers still in place, further volatility is predicted with some commentators predicting another full-blown food crisis for 2013. The stage is set for more instability in the food markets and more serious global consequences as a result.

The fickle nature of the markets is not helping. The recent vogue for agriculture and agribusiness investing seems to be fading while the problem of food security persists. According to an article in the Financial Times, many private investors didn’t see the big profits they were lead to expect from agriculture and are now getting cold feet. Forbes recently declared those agriculture ETFs mentioned earlier to be “oversold”.

And it’s important to point out, that while the levels of investment in agriculture went up, there’s little evidence that global food production increased significantly. That seems to indicate that the private investment money pouring into the market has done little to change the reality of food availability in the world. Clearly, this capital did not reach the places where it could make a real difference, a fact that highlights the need for a more sustainable market-based approach.

Tapping the potential of the poor smallholder

Another serious failing seems to be that the recent boom in agricultural investment has hardly touched the world population of rural poor. This group makes up 75% of the 2.6 billion people living on less than $2 per day, the international measure for poverty,according to UN figures. Some 80% of them live by farming or farming-related activities. A2012 research report by the Dalberg Group estimates that there are 450 million poor smallholders worldwide.

Large multinationals tend to invest in only the largest and most profitable farm businesses in the developing world.They also tend to acquire only the best land, leaving the less productive farmland to the locals. This means that these poorer farmers, tilling the poorest patches, are excluded from the commercial equation. Also left out are those who can’t afford the products sold by the big multinationals. For many corporations, the goal in the developing world is simply to increase the market for their western-style products; for example equipment (such as harvesters) and inputs (such as seed and herbicides); to those farm businesses that can afford them.

Yet ignoring these rural small holders may prevent us from solving the bigger problem of food security on both local and global levels. Rural smallholders represent an untapped, underdeveloped resource that has the potential to change the global food picture. There is evidence now that multinationals are looking to smaller producers to source commodities, especially sustainably produced and certified ones. Yet small holders won’t be able to connect with this global marketplace if they can’t increase yields, improve the quality of their produce and get their products to buyers. To do this they need capital; the Dalberg report estimates the demand at $450 billion, now largely unmet. And, to be effective, that capital has to be the right kind of capital, and it has to reach the right places.

Keeping sight of the big picture

Development agencies and NGOs have long known that agriculture holds the key to more than just food supply. A healthy agricultural economy has the power to transform rural prosperity, strengthen social stability, empower women, protect health, and nourish economically productive urban centers. The right kind of agricultural development can also provide a means of improving environmental stewardship (for example fighting deforestation) making it a powerful tool in the struggle to adapt to climate change. This is as true in the developed world as it is in the developing one.

Many of the multinational corporations now active in agriculture are making the right noises in these areas. The growing global demand for sustainable, responsibly sourced and organic and Fair Trade certified food products, has lead a number to make commitments to sustainable sourcing. (The top five chocolate manufacturers have all publicly committed to sourcing sustainable cocoa, for example.) Recent statistics from the Rabobank, a Dutch agricultural lender, say 70% of US farmers now report using sustainable methods.

There’s hope that this heralds a new approach to investor responsibility among big agribusiness corporations.Yet it’s unlikely that multinationals will ever put social and environmental benefit on par with profit in their investment strategies. At the same time, international aid agencies and charitable NGOs are putting social and environmental benefit first, but their grant-based, philanthropic approach may not be enough to turn the tide of a global food crisis. More capital and smarter, more sustainable capital; will be needed to change the future of food.

All of these factors mean the time is right for impact and sustainable investing in agriculture and its broader category, agribusiness. The need for a new approach is evident. The tools, at least some of them, are in our hands. Meanwhile, a global community of impact investors and social benefit investors of all stripes are finding new ways to put those tools to work. But we’d better hurry. Our peace and our survival depends on getting it right.

Find out more about to find the investing opportunities in agriculture and agribusiness. Investing in Water for Life
0 replies